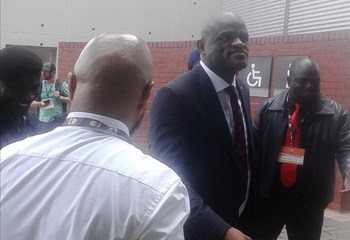 Photo: Leatile Leiee
The state of Northern Cape municipalities, with some in a serious financial crisis, will be scrutinised during a planned summit by the Provincial Government.

During his State of the Province Address (Sopa) at the Mittah Seperepere Convention Center in Kimberley on Thursday, premier Zamani Saul announced that government stakeholders already visited these municipalities. He said five districts and ten local municipalities have been identified for support in achieving improved audit outcomes. He adds that the Local Government Summit, planned for this year, will further unpack the challenges and constraints hampering service delivery. Saul says this will guide the development of a programme of action aimed at turning around the state of these municipalities.

A team, comprising of senior representatives of the Office of the Premier, Provincial Treasury, Cooperative Governance, Human Settlements and Traditional Affairs (Coghsta), and the South African Local Government Association (Salga), has already visited these municipalities.

In 2018, a report by the National Treasury indicated that municipalities in the province owed their creditors almost R1,5 billion for the third quarter of the 2017/18 financial year.

Following the negative reports on these municipalities, concerns were raised before today's Sopa by several opposition parties that almost all municipalities in the province are either bankrupt or can't pay workers’ salaries.

He says what is noteworthy, is the fact that the provincial growth rate of 2.8% in 2017 was above the South African GDP growth rate’s average of 1.4% for the same period.

"The GDP of the province is R96 billion, of which the mining sector contributes an estimated R19 billion, agriculture R6.8 billion, while construction contributes R2.6 billion. There are huge untapped investment opportunities in our province," Saul adds.

#Coronavirus: FS students ready to be with their families

How #Coronavirus lockdown differs across the world

#Coronavirus: Ramaphosa to see off citizens after their quarantine