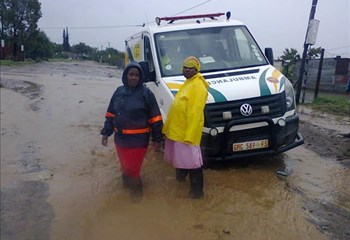 Phase 9 residents in Bloemfontein in the Free State say they are extremely concerned about and wary of the road infrastructure in their area, especially during heavy rains.

One of the local residents, who wanted to remain anonymous, says heavy rain mostly leads to localised flooding and that they constantly leave in fear. This after an ambulance recently got stuck in the mud in that area after heavy rain. It was transporting a woman that was in labour. Community members helped to push the ambulance out of the mud.

He says another heart-breaking incident recently hit them hard when they had to carry the casket of a deceased person to the hearse because it could not gain entry at the funeral due to the condition of the road. These two incidents occurred after a warning by the South African Weather Services last week of severe thunderstorms which resulted in localised flooding over the eastern parts of the northern Free State. The Mangaung Metro Municipality is yet to respond.

The bad weather conditions have not only been blamed for damaging road infrastructure, it has also been tipped as the reason behind the recent spate of power failures in certain areas of Mangaung since the weekend.