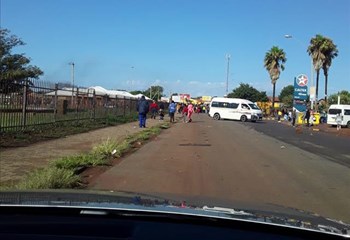 The attacks on foreign-owned national shops in Jouberton at Klerksdorp in the North West has drawn much criticism from social media users in that area.

Many have taken to Facebook to vent their frustration with the looting incident that took place on Monday afternoon in extension 10. The incident has been labelled as senseless and unnecessary by many and they called for the local police to act swiftly and apprehend the predators. Reports say that foreign nationals have been taken to a place of safety.

Meanwhile, a group calling itself the Forum 4 Service Delivery (F4SD), has allegedly called for a total shutdown of the area in protest of poor service delivery. Community media outlets also report streets are currently blocked with rocks and burning tyres, despite F4SD president, Mbahare Kekana, denying any knowledge about the planned protests in their name.

Kekana says F4SD distances itself from the message circulating on social media, encouraging among others the burning of infrastructures and looting at Matlosana.

Last week a group of disgruntled residents protested outside the Matlosana Local Municipality offices in Klerksdorp. This followed days after another group from Khuma, near the city, occupied the municipal offices.