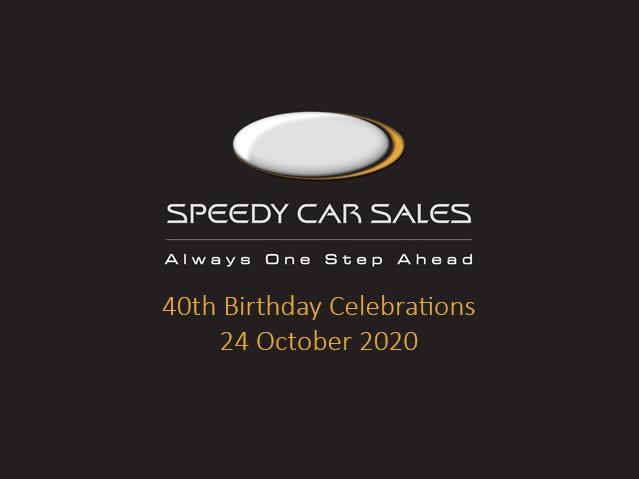 Come celebrate this tremendous milestone when the Central SA Top 30 with Shandor Potgieter, broadcasts live from Speedy Car Sales at 6 Anderson Street, Klerksdorp this Saturday from 9am!

Browse the amazing automotive deals and marvel at the Motor Sport museum.

At Speedy Car Sales Klerksdorp, they offer a bespoke range of vehicles to address all your motoring needs.

From the young go-getter to the suave, established motorist - they have a vehicle that will exceed your expectations.

For forty years, unsurpassed service has been a vital part of their product offering.

Speedy Car Sales Klerksdorp has been the Absa number one dealer in South Africa for ten years.

Speedy Car Sales in Klerksdorp is one of South Africa’s most respected and successful luxury car dealerships. Owned by Farouk Dangor, the dealership has a long history of selling high-end vehicles and rare cars to clientele from all over South Africa.

Our dealership has been recognised time and time again for the high level of service, absolute professionalism, and incredible quality that we offer. We have been awarded the Absa #1 Executive Dealer in SA for 10 Consecutive Years, the Absa Top 50 Golden Dealer for 31 Years.

Dangor started with R300 start-up capital from his late father in 1974 buying and selling mag wheels in Klerksdorp having all odds against him in the apartheid Era. He had to acquire a white nominee to trade under his name, notwithstanding all these obstacles he persevered and in November 1980 started Speedy Car Sales, the rest is history.

His passion lead him to be the first Indian racer in 1980 to represent South Africa against the world team in Hotrod racing. He moved on to National GP N Production cars and later in South African Touring cars with lots of successes recorded.

He was also the first Indian and only Klerksdorp racer to have competed in the most difficult race in the world in a 24 hour endurance race at Nurburgring in Germany in 1992.

His late son Mohamed decided to celebrate his achievements by creating a modern day Motor Sport Museum in Klerksdorp.

His original race cars have been restored to original spec. (BMW 325 IS, OPEL SUPER BOSS, BMW M3 BRITISH TOURING CAR) and can be viewed at the Motor Museum.

Late Mohamed also acquired original race suits and helmets from Formula 1 drivers and also most of the top SA Racing drivers that Farouk competed with in the early nineties which is regarded as the golden era of Motor Racing in SA.

Speedy car sales stocks over 250 vehicles from a Ford Figo to Ferrari’s. ABSA Vehicle finance are represented on his floor

The Speedy Logo reads “Always One Step Ahead”

Speedy Car Sales is known to have stock of latest models at times, before the vehicles are available at official dealerships.

They deliver nationally in South Africa with their own delivery trucks.

Farouk is also a philanthropist and serve as treasurer of the Klerksdorp Muslim Community for the past 21 years. Through the grace of the Almighty, it started from 2 sets of mags 46 years ago and has become a success story! 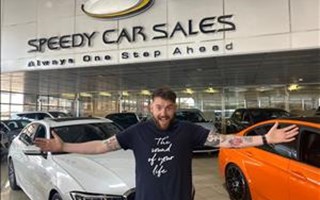