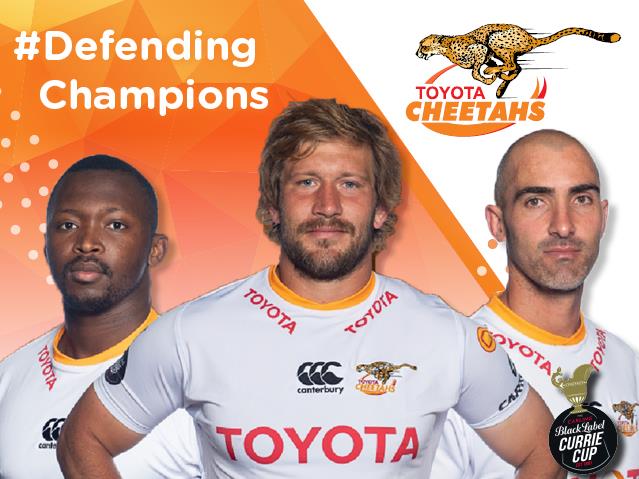 
Support Central South Africa’s pride on their hunt for a seventh Currie Cup trophy! OFM is a proud partner, sponsor and number one supporter of the Toyota Free State Cheetahs.

The Toyota Cheetahs will defend the crown they won in the 2019 final against the Xerox Lions, as well as the Vodacom Blue Bulls, Tafel Lager Griquas, Phakisa Pumas, Cell C Sharks and DHL Western Province.

The opening round of matches will see the Cell C Sharks host the Phakisa Pumas, Tafel Lager Griquas take on the Xerox Lions and the Vodacom Blue Bulls travel to Cape Town to face DHL Western Province. The Toyota Cheetahs have a bye.

The action will build up to the semi-finals on Saturday, 16 January 2021, when the top four teams on the log will slog it out to progress to the final (23 January).

*Due to the Covid-19 pandemic, no matches are open to the public. Watch the games on SuperSport

Fixtures for the 2020 Carling Currie Cup (all subject to change):

More about the CARLING CURRIE CUP

South Africa's oldest and premier provincial competition ran from July to September in 2019, and the Toyota Free State Cheetahs were crowned champions in front of their home fans in Bloemfontein, beating the Xerox Lions from Johannesburg in the final. The other teams in the competition were 2018 champions, the Cell C Sharks (from Durban), DHL Western Province (Cape Town), the Vodacom Blue Bulls (Pretoria), Phakisa Pumas (Nelspruit) and Tafel Lager Griquas (Kimberley). The same seven teams will contest the Carling Currie Cup in 2020, with the opening round on 27/28 November and the final set for Saturday, 23 January 2021 (due to the season being disrupted with the COVID-19 pandemic).

The Currie Cup is one of the oldest rugby competitions in the world, with the first games played in 1889, but it was only in 1892 that it became officially known as the Currie Cup. The original participating unions were Western Province, Griqualand West, Transvaal and Eastern Province. The first tournament was held in Kimberley and was won by Western Province. The Currie Cup trophy was donated to South Africa in 1891 by the touring British Isles team - it was given to the tourists by Sir Donald Currie, owner of Union-Castle Lines, the shipping company that transported them to the southern tip of Africa. Sir Donald was clear with his instructions – hand this trophy over to the team in South Africa that gives you the best game. After a spirited display where the unbeaten British Lions narrowly won 3-0, Griqualand West became the first ever holders of the Currie Cup.