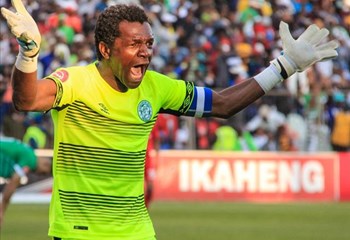 Patrick Tignyemb - Morgan Piek
The former Bloemfontein Celtic captain and goalkeeper, Patrick Tignyemb, has vowed to continue fighting for his players after having his contract terminated by the club on Tuesday morning.

Tignyemb was fired by the club after confronting the management about the ongoing issue of bonuses that have not been paid to the players.

Just last week the Premier Soccer League match against Highlands Park in Tembisa was in doubt as the players went on strike again in solidarity of the general employees at Celtic who had not been paid it their salaries in quite some time.

The player strikes duo to unpaid salaries and bonuses has been ongoing since the 2017/18 season, and this even led to the former coach Veselin Jelušic walking out on the club.

This season this very same issue was one the leading causes for Steve Komphela to resign from the club in December, and this while Celtic were still genuine title contenders

It is believed that the players got threatening letters stating that if they don’t report for training on Tuesday morning, they will be released or they won’t get their May salaries. When Tignyemb tried to speak up for the players, he was released.

Speaking to OFM Sport, the former Cameroonian international goalkeeper and skipper, Tignyemb, indicated that he won’t back down and the case may end at the South African Football Players Union (SAFPU).

“Yes, it will go to the players union.

“It has been going on for too long. As the captain, I am fighting for my teammates.

“It is a problem. I told them that I can’t keep calm until they pay my players.”

Representatives of the club could not be reached for comment.

Amazingly with all that has happened off the field this season, Celtic, are fighting to finish the league in the top eight this season, instead of being in the relegation battle along with Maritzburg United, Black Leopards, Free State Stars, and Chippa United.

Celtic are set to cap off their season against AmaZulu in East London on Saturday, however, it remains to be seen if the players will travel to the Eastern Cape for this match. On Tuesday morning Tignyemb’s “former” teammates boycotted training in support of the flamboyant short-stopper who has spent the last 11 seasons at Phunya Sele Sele.

Unrest in Vaal over electricity