Hey, Ya! It’s time to bring sexy back. One more time with arms wide open. In the end, just dance – hips don’t lie. Bring me to life in another universe, tik tok, don’t stop the music.

Since you’ve been gone, how you remind me I gotta feelin’ to escape rehab with you. A seven nation army couldn’t bring you down. You’re the reason I’m real, my little Indigo Girl.

Say it right with all the small things because it can get complicated when you’re crazy in love.

So here it goes again, are you ready to Hollaback girl?

This winter OFM celebrates the decade where ‘google’ became a verb, ‘like’ became a noun and ‘tweet’ and ‘friend’ gained new meanings.

When we all briefly blogged and went cray-cray crunking in the club dropping it like it’s hot along with our peeps.

It was an era where you could you lose yourself in the music, the moment; when pop superstars turned into global icons.

The time the mix tape turned into a disk with songs you listened to on loop, belted along with your besties, cuddled and cried to, which you now consider your karaoke staples.

Have you caught yourself going “Oops, I did it back then”?

Well, here’s your chance to relive that magical era. Each Thursday at 10am, June to August, OFM presents the Noughty Network. Half an hour of guilty pleasure songs from 2000 to 2009, chosen by you. Plus, you stand the chance to win an exclusive OFM hamper filled with branded merchandise to help warm you up this winter. Included is a beanie, scarf, gloves, blanket, thermos and mug, so you’ll be nice and snug this season!

Check the videos below for some inspiration. 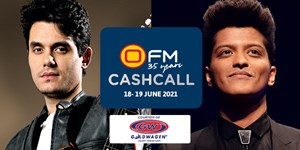