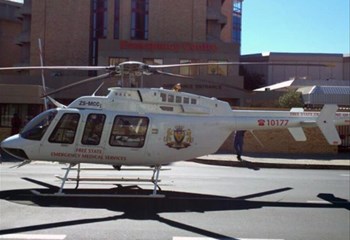 Photo: Supplied
A 41-year-old woman and 44-year-old man have both suffered critical injuries following a collision between a Jet Ski and a speedboat at the Vaal Marina earlier on Saturday.

They were both on a speedboat when the incident took place.

According to spokesperson Ross Campbell. ER24 paramedics arrived on the scene along with another private service at 15:20 in the afternoon.

The patients had been brought to the shore by bystanders on another boat. The female patient was found to have suffered a head injury, while the male patient had suffered multiple injuries and both required Advanced Life Support interventions.

They were flown by medical helicopter to a private hospital for further care.

Two others on the speedboat (a younger male and female) were found to have suffered minor injuries and were treated by the other private service on scene.

The man from the Jet Ski was unharmed in the incident.

One killed in suspected robbery