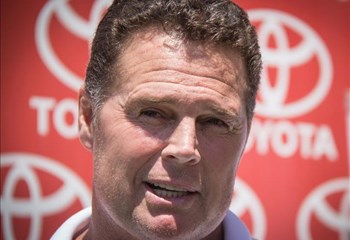 Rassie Erasmus - Morgan Piek
The Springbok coach, Rassie Erasmus, was in Bloemfontein on Tuesday where he was part-taking in a franchise visit at the Toyota Cheetahs along with his entire coaching staff.

With 2019 being a Rugby World Cup year, Erasmus is visiting all the franchises in South Africa. Part of the process is meeting with the various coaches and outlining what he expects from the respective teams.

This includes the work schedule of certain players earmarked for both the Rugby Championship and World Cup.

Erasmus has more or less an idea of who he will be taking with to Japan for the global showpiece, however, there is still time for players to put up their hands.

There is a notion that Erasmus and SA Rugby has no interest in what is happening with the Cheetahs and the Southern Kings in the Guinness Pro14.

Erasmus told OFM Sport that the Pro14 does play an important part of his plans and players such as the Cheetahs captain, Shaun Venter, is being watched closely indeed.

“We might make a turn at the Cheetahs as often as we would like to and this purely because we were only appointed last year.

“Obviously we are analysing all the Pro14 games and I coached in this particular league as well. I know that positions nine, two, five, ten and fifteen are positions in the Pro14 that really challenging because of the conditions, the different refereeing interpretations, and different pressures.

“It’s a really a different style that a player must get used to, and Shaun Venter is definitely a player that I am looking at.

“Unfortunately the Pro14 is one those competitions that were if a guy does really well consistently, you know that he will probably make it at Test match level.

“But, if on the flip side of the coin, if a player struggles in 50% of the games, he probably won’t do well at Test match level. This is because this competition is much different to Super Rugby.

“In the Pro14 it is all about tactical awareness and the handling pressure.

Previously Erasmus also stated that for Cheetahs players to be noticed it is vitally important for them to win games away from home, especially in Europe. The Cheetahs will be heading to Europe next for a Pro14 tour which will include games against Connacht, Scarlets and Leinster.

The Bok mentor added that it will be important for the Central franchise to have a good tour of Ireland and Wales.

“The most important thing about playing international rugby is to be consistent. I admit that we haven’t gotten that right either. The big thing is to do it week in, week out.

“Sometimes you get a player who is fantastic and steals seven or eight balls in a game, but his lineout throwing or scrummaging is terrible, but we just the flashy stuff.

“The consistency must be in all areas of a player’s game, and then it really does help if a team is consistent in winning, and has a winning culture as well. So, it is a combination of both aspects.

The Springboks will also be holding a final training camp in Bloemfontein ahead of their departure to the World Cup. According to Erasmus a group of up to 37 players will be spending a week to ten days in Bloemfontein to do the final fine-tuning before heading to the Land of the Rising Sun.

Griquas are itching to return to the field