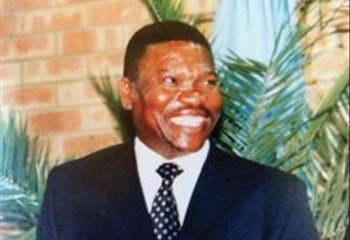 Moss Phakoe (Photo: ANA)
Murdered Rustenburg councillor Moss Phakoe was remembered at a council meeting on Tuesday, ten years after he was killed.

Councillor Abinaar Matlhoko from the Economic Freedom Fighters told the council to remember Phakoe and passed a message of encouragement to his family.

"We remember councillor Moss Phakoe. He was brutally murdered ten years ago, we also think of his family," Matlhoko said.

Phakoe was gunned down when he arrived at his home in Rustenburg Noord on March 14, 2009 after erecting ANC posters for the 2009 general elections.

He was killed  two days after submitting a dossier containing evidence of alleged corruption in the Rustenburg municipality to high-ranking ANC officials, including late Local Government Minister Sicelo Shiceka.

Former Rustenburg mayor Matthew Wolmarans and his bodyguard Enoch Matshaba were arrested for his murder.

Wolmarans was sentenced to 20 years in jail while Matshaba was sentenced life.  The pair were released after a State witness, Emmanuel Masoka, later deposed an affidavit in which he said his testimony had been false.

Masoka was charged with perjury for making conflicting statements under oath.

The council meeting is underway at the Rustenburg Civic Centre. It would touch on the 2019/20 draft integrated development plan and the 2019/20 medium term revenue and expenditure framework.