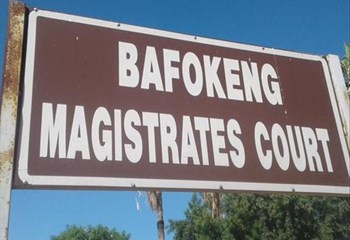 A 31-year-old man accused of the brutal murder of his live-in-lover will know on Friday whether his bail application was successful.

Magistrate Andrew Mmokwa is expected to deliver his judgment on the bail application of Thabo Moabi, accused of killing Segametsi Molefe in Tlaseng near Rustenburg on March 27.

Opposing the application, prosecutor Tebogo Letlhabane said Moabi's life could be in danger as the community in Tlaseng was angry over the murder, adding that the accused might also interfere with evidence.

The court heard that Moabi was a violent person and that some members of the community were scared of him, to such an extent that two people were waiting for the outcome of his bail application before they could make statements to the police.

The two potential witness had indicated to investigating officer Constable Meshack Modisane that if Moabi was granted bail they would not make statements.

Moabi's lawyer Ofentse Raikane said his client's clean criminal record was an indication that he was a good candidate for bail.

He pledged that Moabi would stand trial, would not hinder investigations and would comply with all bail conditions the court imposed.

Moabi had told the court he had not intended to kill Segametsi, saying he slapped her and pushed her against a wall after overhearing her talking to a man over the phone.

He said the phone conversation was on speaker phone, and he heard the man declaring his undying love to Moabi's girlfriend.

"I was heartbroken and slapped her, she pulled out a knife and I pushed her against a wall, she hit the wall with the back of her head and fell, I then went outside," he said.

"When I returned I found her at the same spot and I thought she had fainted. I covered her with a blanket and put her on the floor near the bed,"  Moabi added.

Modisane, however, told the court that Segametsi's body was found under the bed.

Water tanks for schools a cause for concern

NUM takes legal against NW mine