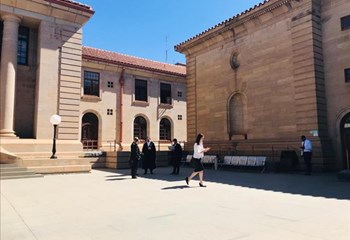 PHOTO: Olebogeng Motse
Cash Paymaster Services (CPS) is adamant the South African Social Services Agency (Sassa) unduly benefited from a service they did not pay for.

CPS, represented by Advocate Alfred Cockrell, in proceedings at the Supreme Court of Appeal (SCA) in Bloemfontein on Tuesday, argues the additional function CPS had to perform for Sassa, was not provided for in the agency’s request for proposal (RFP). This additional function is the registration and verification of eleven million indirect Sassa beneficiaries, specifically children, which forms the heart of the contentious matter between the parties. The children are referred to as indirect beneficiaries because money is collected on their behalf by a guardian/parent.

CPS is in today’s proceedings appealing the North Gauteng High Court’s 2018 judgment ordering the controversial company to pay back over R316 million with interest to Sassa.

Cockrell argues only under ten million beneficiaries were initially quoted in the deal. They only represented the number of cards issued but did not account for the number of children that would be processed through the issued cards.

CPS’ version is that the “penny only dropped” after the contract between the parties in question came into effect and it was discovered there were in fact over eleven million indirect beneficiaries that also had to be registered – in addition to more than nine million beneficiaries already registered.

Cockrell is adamant his client was not going to make a profit unless the entire arrangement was amended.

Justice Mahube Molemela points out that Sassa’s affidavit reveals the RFP had envisioned the capturing of children’s data contrary to CPS’ argument. Justice Mahomed Navsa echoes Molemela’s revelation casting further doubt on the allegation the penny only dropped after the contract was implemented, adding this assertion “strains credulity”.

Cockrell was later asked to provide clarity behind the increase in the cost per transaction to CPS once the discovery was made.

He says the initial R16, 44 was to be paid per month, per recipient for the entirety of CPS’ five-year contract. This amount covers the registration and verification of the beneficiaries as well as the service of paying out the grant money. The controversial fee of R23,20 was a once-off fee for the additional beneficiaries and was not intended to be paid monthly. This latter amount was meant to cover the hiring of people and transportation of those employees to go to the children’s homes and verify their details.

Sassa, on the other hand, represented by Advocate Nazeer Cassim in proceedings, refutes CPS’ assertion that children were not included in the RFP, quoting a clause in the proposal to support this argument. This clause states: “for child support, foster child and care dependency grants, the successful bidder must ensure that biometrics and data relating to children is also captured”.

The third respondent in the matter, Corruption Watch, is still contending the “alleged variation agreement concluded by Sassa and CPS” as well as the money paid over, contravened the Promotion of Administrative Justice Act (PAJA) and the Supply Chain Management Policy.

Lesotho PM due in court for murder of former wife