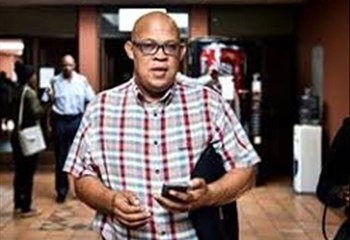 The case against former Free State Premier Ace Magashule’s driver, who is accused of stealing the multi-million rand Pierneef painting, will resume in the Bloemfontein High Court on June 10.

This, after his case was postponed in his absence in the Bloemfontein Magistrate’s Court today.

The National Prosecution Authority’s spokesperson in the province, Phaladi Shuping, confirms the attorney of the 42-year-old suspect, Ricardo Mettler, presented his medical certificate to the court and the case was postponed in his absence to 10 June 2020, for a pre-trial conference in the High Court.

The painting, by legendary South African landscape artist Jacobus Hendrik Pierneef, was allegedly stolen from the OR Tambo Building in Bloemfontein during Magashule’s tenure and taken to an Auctioneers firm in Gauteng to determine its value and to be auctioned. The painting, which was valued at approximately R8 million, was later seized by the Hawks.

The Hawks spokesperson, Lynda Steyn, in February told OFM News the 42-year-old is also facing charges in connection with Contravening Section 32(13) of the National Heritage Resources Act, making false statements in an affidavit, and in terms of the Prevention of Organised Crime Act, amongst others.

It has been reported that the painting was allegedly among Magashule's personal belongings when he vacated his Bloemfontein office and that it was given to Mettler as a goodbye-gift when Magashule took up the ANC Secretary-General position in Luthuli House.

According to media reports, Mettler admitted receiving the painting as a gift from Magashule. The painting then ended up with a local businessman, who approached auctioneers to determine the value of the painting. The auctioneer placed an advertisement – including a photo of the Pierneef painting - which was noticed by Free State authorities, who then discovered the artwork was missing. The auctioneers reported the matter to the police.

Denosa could head to court over protective gear