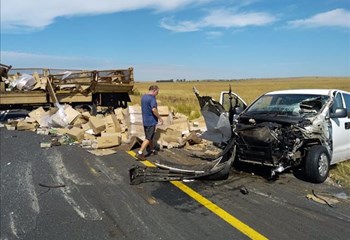 An accident has left three injured on the N1 road near Winburg in the Free State today.

Towa further says that the truck was driving in the direction of Bloemfontein when the accident occurred. He says the bakkie bumped into the truck from the rear. One lane was obstructed but is again open for traffic.

FS ambulance involved in an accident

Passengers missing after collision in Bfn