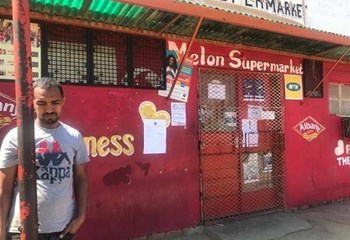 Lucky Bikila in front of his store in Bolokanang at Petrusburg. PHOTO: Olebogeng Motse
Small businesses and schools in Petrusburg have been forced to close on Thursday, following unrest that erupted in the sleepy town’s Bolokanang township this week.

The situation in the town, next to the busy N8 road between Bloemfontein and Kimberley, descended into chaos on Wednesday evening over service delivery concerns, prompting local schools and small businesses to shut down out of fear of possible looting and imminent violence.

The owner of Melon Supermarket, known as Lucky Bikila, briefly weighed in on the situation. Bikila says he and other shop owners in the area are concerned for their safety and their stock in light of the tension displayed on Wednesday evening. During this interview, a select group of young males from Bolokanang, who have chosen to consciously live up to an alternate meaning of the township’s name by protecting the shops owned by foreign nationals and preserve their community’s sense of humanity in the midst of the chaos.

This week, disgruntled residents took to the streets, demanding that the incumbent mayor of Letsemeng Local Municipality, Sello Bahumi, step down from his position in light of service delivery failures.

Community leader Lehlohonolo Banda says residents have been forced to endure raw sewage and waste refuse that has not been uncollected for over two months. Banda says their cries for assistance have gone unheard and they have resorted to protest action to have their demands met.

This isn’t the first time that Bahumi has erred on the wrong side of the community he serves. The incumbent mayor was fingered as the perpetrator in the alleged rape of a 16-year-old girl from Petrusburg in December 2018.

The alleged rape was reported on 21 December 2018, after the victim said it occurred at around 01:00 am. Free State police spokesperson, Thabo Covane, says the matter ended up sitting in the Petrusburg Magistrate's Court in early 2019. The victim and her mother, however, later approached the Sexual Offences Regional Court, informing officials that they no longer wanted to continue with the case. The rape case against Bahumi was formally withdrawn in the Local Magistrate's Court on 28 February 2019, mere days before he was selected as the preferred candidate for the position of mayor.

His predecessor, Thandiwe Reachable, is also no stranger to controversy and scathing criticism from Letsemeng residents. In early March 2019, Reachable stepped down from her position, following months of intense protest action in the small town of Koffiefontein, where residents repeatedly called for her head.

Protest action in the Free State mining town intensified in October 2018, with angry residents burning and destroying public and private property in an effort to oust Reachable. Schooling came to a complete halt as a result and pupils, with the exception of grade 12’s, could not write their final examinations, leaving many in limbo when the new academic year got underway in early 2019.

Communication will be key - Letsemeng mayor