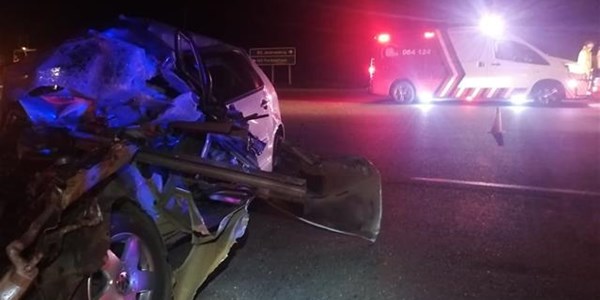 Two young men have died in a multi-vehicle collision involving a truck trailer and two cars outside Potchefstroom in the North West.

ER24 spokesperson, Ross Campbell, says the vehicle the deceased were travelling in crashed into a truck trailer at the N12/R54 intersection outside Potchefstroom after 22:00 on Friday.

Another light motor vehicle was involved in the accident but the sole occupant of that car – a woman – managed to escape unscathed.

Campbell says when paramedics arrived at the scene the two occupants of the first vehicle were trapped inside the wreckage and had in fact died on the scene. Campbell says the local fire brigade and law enforcement authorities were present at the scene of the accident as well.

The truck driver also escaped the accident without any injuries.

The accident in the North West comes after three people were horrifically killed along the KwaZulu-Natal south coast when the driver of a tipper truck lost control of the vehicle. Netcare911 says the truck driver slammed into a car in Emqangeni killing two people and then went on to crush a female pedestrian to death. The same truck veered off the road and hit an outbuilding at a school located not too far from the accident scene. Netcare says the truck driver in that collision was seriously injured.