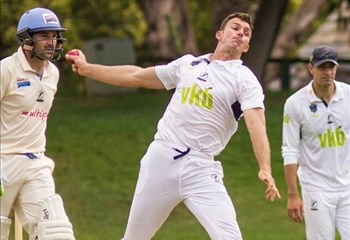 The 35-year-old Free State and Knights great played in 154 first-class matches during his illustrious career, and in the process scored 6298 runs at an average of 33.86. He also scored seven centuries and 33 half-centuries, with a career highest score of 140 runs.

It is with the ball where McLaren really made his mark in South African cricket, and during his career, he took 459 wickets at first-class level, and 250 in List A cricket.

McLaren played two Tests for South Africa, as well as, 54 One-Day Internationals and 12 T20 Internationals. When he was at the top of his game he was controversially omitted from the Proteas squad which competed in the 2015 ICC Cricket World Cup in Australia and New Zealand.

In an exclusive interview with OFM Sport, McLaren revealed at there was no doubt in his mind that it was the right time to call it a day.

“It’s a time that everyone knows is coming and speaks about, it’s inevitable. For me, the important part about it was knowing when it was the right time.

“I’ve had a bit of time to think about it, and after 16 or 17 years of the hard graft in four-day cricket, I realised that it is the right time.

“It is a good time to finish, considering where the team is, and importantly it offers younger guys the opportunity to get to know the game in first-class cricket, and for those who have the ambition to play Test cricket.

“From a personal point of view, I wanted to finish on a high, while still playing good cricket. Secondly, from a family point of view, it is tough when I’ve got a young family, and spending a lot of time away from home is pretty tricky.

“So, I would like to spend time with them and see my two boys grow up.”

McLaren will be remembered for being a fantastic ambassador for the sport both on and off the field, and as a player, he will be sorely missed.

McLaren indicated that although he will not be playing red-ball cricket anymore, he is by no means lost to the sport, and he plans on giving back to the game that has served him well since 2003.

“Outside of cricket, there are a lot of opportunities. I will be involved at Grey College from a cricketing point of view, mainly with consulting and with coaching. I will also be involved at the Sports Performance Clinic (SPC) as a consultant.

“Hopefully, on the sports marketing front as well. I have some ambition to get involved with the corporates in this regard.

“Regarding the Knights and the Free State cricket I will probably have a sit-down with the union and discuss the path forward. I will probably be in involved with One-Day and T20 cricket in a coaching or consulting capacity.

“I will like to finish my coaching qualifications and levels in August this year. So, there is a lot to look forward to.

“It’s definitely not the end of the road, but from a first-class cricket point of view it just the right time.

“It is a bit of an emotional time, but it something that I look back at with very fond memories.”

McLaren also played County Cricket for Kent and Middlesex in England, and Indian Premier League (IPL) cricket for the Kolkata Knight Riders, Kings XI Punjab and the Mumbai Indians. He also enjoyed a spell with the Dolphins domestically, and more recently he played for the Nelson Mandela Bay Giants in the inaugural Mzansi Super League.

Von Berg to link up with the Knights this weekend

Du Preez off to coach in Greece