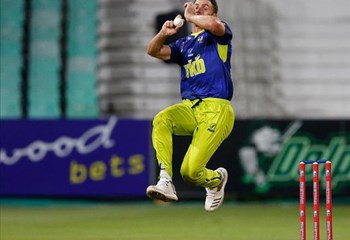 Ryan McLAren - Gallo
The former Proteas allrounder, Ryan McLaren, will be playing at home for the VKB Knights one last time when they face the Dolphins in Bloemfontein in the CSA T20 Challenge on Wednesday evening.

McLaren, who has been a long time servant of Free State cricket announced his retirement from the first-class cricket earlier in the season at the conclusion of the Domestic 4-Day competition.

While there Knights still have three games left in the T20 competition and in the season, it will indeed be the Knights last home game of the season.

Sadly, McLaren wasn’t able to shine with the bat or ball in the shortest format of the game in front of the Knights faithful, but this was purely due to all of their previous home games in the competition being washed out.

At this stage rain is set to play a factor again on Wednesday, however, it may clear up for just long enough to allow for a game.

McLaren, who previously left the Knights to play for the Dolphins, told OFM Sport that if rain does have an impact, it will not be the end of the world.

“It’s been about 17 years of cricket here with the Free State, Eagles, and the Knights, but it going back a lot further than that.

“As a child, I used to watch Hansie (Cronjé), Allan (Donald), Boeta (Dippenaar) and Nicky (Bojé) and the likes of prepare and perform from the Free State. There was a lot of inspiration as the child.

“I’ve had a really awesome journey, but it has to come to an end at some stage.

“This team is growing and there is a lot of young and exciting talent coming through. Guys like Raynard van Tonder, Gerald Coetzee, Patrick Kruger, and Andries Gous and the likes of are the core to take the team into the future.

“So, ja, for me, it is the right time and I have a lot of great people to be thankful for. All the coaches, teachers and teammates and everybody that has made the journey such a memorable one. I’m really grateful for that.

“If it has to happen that there is cricket tomorrow (Wednesday), then fine, but if the rain interrupts then that is also fine.

“There are a lot more people that need the rain than another game of cricket.

“If we do play it will be a special one to finish in Bloemfontein, but if not it is also fine.”

Wednesday evening’s game at the Mangaung Oval in Bloemfontein is scheduled to get underway at 18:00.