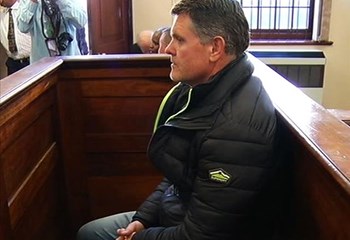 Former property mogul, Jason Rohde, was sentenced to 20 years in prison for murdering his wife and obstruction of justice in the Western Cape High Court on Wednesday.

Rohde was found guilty of murdering his wife Susan at the Spier Wine Estate hotel in 2016. In 2018, Rohde was convicted for the murder of his wife and staging it as a suicide.

The trial revealed Rohde's extramarital affair with an employee, slurs hurled between the murdered woman and the mistress via WhatsApp, and testimonies from the couple's marriage counsellor and psychologists.

The State has asked for a sentence of between 18 and 20 years, while his three children have appealed to the court for leniency.

Judge Gayaat Salie-Hlope imposed a sentence of 18 years direct imprisonment for the murder and an additional five years to be served concurrently for the second charge.

This means three of the five years handed down for count two will be served after the sentence for count one.

Mdluli, co-accused back in court for sentencing