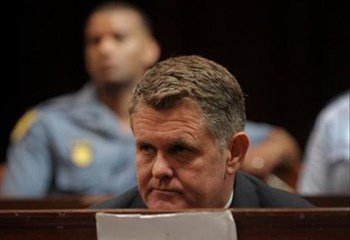 Property mogul Jason Rohde's application for leave to appeal his conviction and sentence for the murder of his wife Susan Rohde was dismissed in the Western Cape High Court on Tuesday.

Judge Gayaat Salie-Hlophe said the defence had rehashed arguments made during Rohde's trial and sentencing and that the submissions had already been decided on.

"I am of the view that the applicant has not satisfied this court that he has a reasonable chance of success," she said.

Rohde was sentenced to an effective 20 years in February for killing Susan and staging her suicide at the Spier hotel in Stellenbosch three years ago.

At the time, Salie-Hlophe said 18 years for the murder was an appropriate sentence as well as five years for obstructing justice for trying to make Susan's death look self-inflicted, three of which would run concurrently.

Rohde, who was not present during Tuesday’s proceedings, maintained his innocence throughout the trial. His position was that his affair drove his wife to take her life.

In the leave to appeal application, defence lawyer Graham van der Spuy argued that Rohde had prospects of success on appeal.

He dug into the medical pathology evidence of Dr Akmal Coetzee-Khan and pathologist Dr Deidre Abrahams, saying there were numerous shortcomings and errors in their testimony.

Coetzee-Khan demonstrated fundamentally basic mistakes – which he called "forensics 101 errors" - in applying his discipline of forensic pathology and found that Susan could not have died in a hanging position.

"There is a litany of mistakes made in performing the post mortem, aspects that he literally missed, incorrect interpretations and aspects where his integrity is called into question," Van der Spuy said.

There was also a list of injuries Coetzee-Khan didn't pick up, including bruises and fractures, he continued.

"It was postulated by [Coetzee-Khan and Abrahams] that she had been strangled manually or [that she], possibly with the use of a pillow, was smothered."

Prosecutor Louis van Niekerk said while the defence was placing special focus on the pathology-related evidence, the case should be seen in context of all of the evidence presented.

"There is not a realistic chance of [success]," he said.

Rohde's lawyer Tony Mostert said they would be approaching the Supreme Court of Appeal directly.

Rohde bail application: My daughters will run out of money