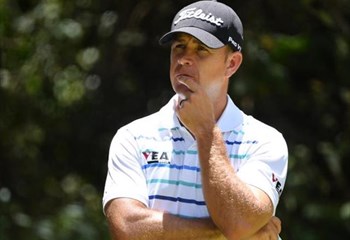 Louis de Jager (PHOTO: Gallo)
Adri Arnaus and Guido Migliozzi fired the lowest rounds of their European Tour careers to share the lead heading into the final round of the Magical Kenya Open presented by Absa.

The playing partners put on a stunning show on day three at Karen Country Club, as Arnaus took the lead at the turn before Migliozzi surged past him on the back nine to lead by two.

A two-shot swing on the last left then the duo tied at the top at 14-under, with the Italian carding a 64 and Spaniard Arnaus taking one more shot.

Overnight leader Louis de Jager of South Africa was at 13-under after a 70, a shot clear of India's Gaganjeet Bhullar and Finn Kalle Samooja.

De Jager entered the day with a four-shot lead but bogeyed the first and while he bounced back on the fifth from just off the green, he had to play out of a bush with the back of his club on the next for a second bogey of the day.

That allowed Arnaus to join him in top spot as the 24-year-old put his tee shot to four feet on the par three fourth, holed a long putt on the fifth and took advantage of the par five sixth.

He then drove just through the back of the par four seventh and two putts handed him the lead on his own.

De Jager hit back with an approach to five feet at the eighth, but a 12-footer at the ninth from Arnaus edged him back ahead at the turn.

Migliozzi turned in 31 as he put his tee shot to eight feet at the second and sandwiched a birdie at the sixth with excellent approaches to the fifth and seventh, but he was still two shots off the lead.

De Jager made a birdie from five feet at the tenth and both the leaders took advantage of the 11th but so did Migliozzi and he then found another gear.

The 22-year-old holed from eight feet at the par five next and when he made a 15-foot putt on the 13th, there was a three way tie for the lead.

De Jager had to play out of a bush with the back of his club again on the 13th and while he picked the shot back up from 12 feet on the next, back-to-back bogeys from the 15th sent him backwards.

Arnaus also bogeyed the 15th and when Migliozzi got up and down from the front of the 17th, holing an 18-footer, the lead was two.

The leader then made his first error of the day on the last and Arnaus rolled a brilliant fast putt down the hill for a closing birdie and a share of the lead.

Coming up behind in the final group, De Jager hit a stunning approach into the 18th, spinning the ball to a standstill and rolling home a closing birdie.

Challenge Tour graduate Samooja looked out of it as he turned in 34 with three birdies and two bogeys but he came roaring home in 30, birdieing the tenth, 13th, 15th and 17th, and eagling the 12th in his lowest European Tour round.

Touchdown with the Louis57 Foundation