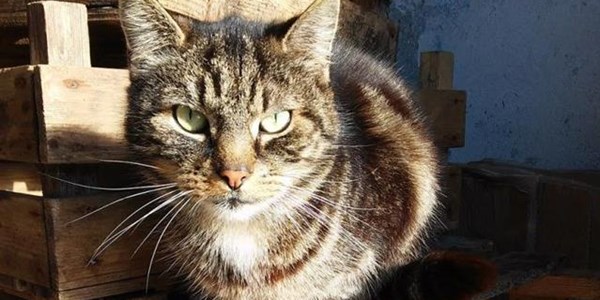 A British family whose cat escaped through an open bathroom window have been reunited with their beloved pet 14 years later.

Mandy Prior, 51, said her family's cat, Taz, escaped through a bathroom window 14 years ago when her family lived in Parkstone, Dorset, England.

Prior said the family searched for Taz, and even continued to put up posters after moving to Branksome, Dorset, but eventually they lost hope of ever seeing Taz again.

"The months and years go by and you just give up and accept you won't ever see him again," Prior told the Dorset Echo.

Prior said she was shocked when she was cruising Facebook recently and spotted a familiar feline face on a page for lost and found pets.

"I noticed he had the same markings and something just told me that it was him," Prior said.

Prior learned that Taz had been found wandering the area near her family's old home, and neighbours said they had been putting food out for the stray cat for several years.

Resident Chris Ward noticed recently that the feline looked unwell and brought the cat to Hilary Ford, who works with Cats Protection and is friends with the owner of Paula's Cat Rescue.

Taz went into the care of Paula's Cat Rescue while receiving treatment for dehydration and a mouth infection from some rotten teeth. Ford posted a photo of Taz to Facebook, where it was seen by Prior.

Taz underwent surgery for the mouth infection and went home to live with Prior and her family this month.

"It's been amazing having him home. Straight away, he was with me all the time and meowing loudly like he used to. Taz is doing well, but he sleeps a lot as he's an older cat. He may be old, but certain traits of his haven't changed," Prior said.