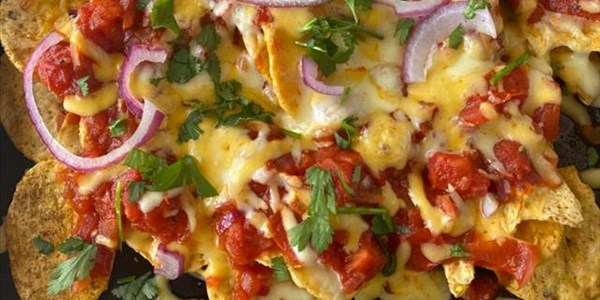 I know the premise of this entire blog, is me cooking someone else’s food.

Since starting this blog, I’ve shared the recipes I cook time and time again, and I’ve also tried to branch out to cook those recipes that seem daunting, or too difficult, or just not what I would generally cook, but that turned out to be delicious.

Every once in a while though, I don’t cook from a recipe.  I will eat something I really, really enjoy and then try to recreate it at home.  I’m not talking about a 26-ingredient masterpiece, but even I can manage a pizza, or burger, or this delicious little morsel I’m about to share with you.  I only ever ate Nachos at the Spur, but when we first came to Kimberley, we were invited to a braai where the hostess served this as a starter/snack.

Since then, I’ve played around with the recipe until I found something that works for me.  This is a vegetarian version, but you could easily beef it up (no pun intended) by browning 500 g of beef mince with the onions and cooking it in the tomato sauce.

I would love to say this recipe serves four, and it certainly could if you served it as snacks or a starter.  However, this is often our Saturday afternoon lunch and it is a generous portion for two in that case, with leftovers to keep nibbling on throughout the afternoon.

A packet of nachos-style chips

1 can of chopped tomatoes

1-2 chillies (deseeded if preferred) and chopped

Preheat the grill on your oven.

Sauté the onions in the oil until soft (add the mince and brown if using).  Add the can of tomatoes and the chilli, add seasoning to taste, and cook for at least 20 minutes.  Spread out the chips on a baking sheet, cover with the sauce, sprinkle over the grated cheese and sliced red onion, and pop under the grill until the cheese is nicely melted.  Garnish with coriander and serve with guacamole and sour cream. 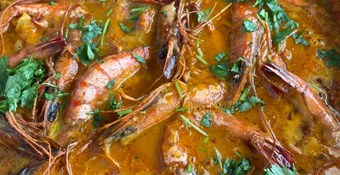 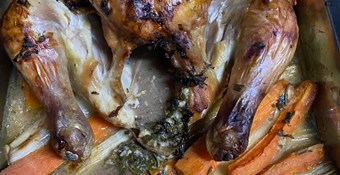 Ilse Cooks the Books: Roast Chicken in Herbs and Verjuice