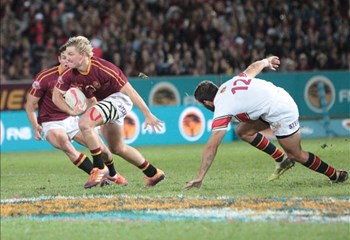 Chris Smit - Luke Thorrold
The Tafel Lager Griquas have boosted ranks ahead of the 2019 SuperSport Rugby Challenge which gets underway next week.

The University of Stellenbosch Maties trio Chris Smit, Johan Momsen and Michael Hazner are Griquas players as from Tuesday.

The Tuks flyhalf, Tinus de Beer, will also be linking up with the Griquas.

Following last night’s Varsity Cup final, Smit, was named as the player of the season.

The Maties coach, Hawies Fourie, told OFM Sport that some of his players are leaving, while he also shied away from commenting on his possible return to the Toyota Cheetahs.

“We haven’t made any decisions yet, so we will see what happens.

“There are a lot of players who will be going, there is Piet Louw who is going to the Pumas, Johan Momsen and Chris Smit will be heading to the Griquas.

Fourie himself has been linked with the Cheetahs head coach role after it was reported that Franco Smith is set to take up a job with the Italian national team.

The Griquas open their campaign next Saturday against the Valke at Tafel Lager Park.