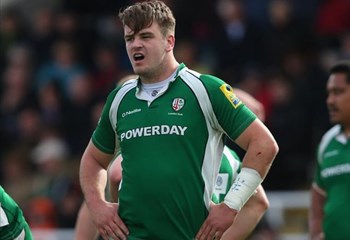 Jerry Sexton - www.premiershiprugby.com
The Isuzu Southern Kings have made a giant leap in their efforts of building a competitive team with the signing exciting Irish lock, Jerry Sexton.

The 26-year-old Sexton is one of the first inspiring signings for the Southern Kings, who are implementing an ambitious recruitment strategy that aims to attract high potential talent.

The 118kg, 1.95m tall second-rower will be a notable recruit for the Isuzu Southern Kings where he will add firepower to the forwards pack, and will make for a thrilling exhibition when he squares up for the first time against older brother, Johnny – the reigning World Rugby Player of the Year, who is the incumbent Ireland and Leinster flyhalf.

Sexton is currently captain of Jersey Reds, who compete in the English Championship, and is regarded as one of the top performers currently in the championship.

“We are pleased to confirm that we have acquired the services of Irish-born lock, Jerry Sexton,” Isuzu Southern Kings’ Director of High Performance, Robbi Kempson who is spearheading the recruitment process, confirmed.

“Jerry will join us in our pre-season preparations ahead of the start of the 2019/20 GUINNESS PRO14 season. His contract with us will run until the end of June 2022.

“It is part of our ambitious plan to bring quality players to assist us reach our goal of becoming a world-class side, and the inclusion of individuals like Jerry will bolster this process.”

Sexton has been an ever-present feature in the Jersey Reds’ league XV, starting all 43 Championship games since moving to Jersey two years ago.

He has been highly regarded in leadership ranks as well, captaining the side in the majority of their matches in the time he has been at the Jersey Reds. He has scored a total of eight tries for the Channel Islands-based side.

"Jerry has contributed a huge amount during his time in Jersey and to see another player get the opportunity to play at the next level is very rewarding for the coaches and should also motivate the players to continue to work towards reaching their own goals,” said Uitenhage-born Jersey Reds Director of Rugby, Harvey Biljon.

“We will all enjoy watching Jerry play in the GUINNESS PRO14 and potentially even see the 'Sexton v Sexton' match-up. I trust he will enjoy South Africa but we hope that we'll see Jerry in Jersey again in the future."

Sexton was part of the Ireland Under-20 side that played in the World Rugby Under-20 Championship in 2013 before plying his trade in England where he featured for top clubs Exeter Chiefs and London Irish before joining Jersey Reds in 2017.

“This is an exciting period in my career,” Sexton said.

“I have been following the Isuzu Southern Kings, particularly in the GUINNESS PRO14, and I am looking forward to be part of the team, the culture and the exciting new era that lies ahead for the franchise.

“I am grateful for the years spent at Jersey Reds and the role the club played in the growth of my career. I look forward to further growth and making a positive contribution at the Isuzu Southern Kings.”

His inclusion in the Isuzu Southern Kings squad follows that of Eastern Cape-born utility back, Courtney Winnaar, who joined the side a fortnight ago, returning to his home province after the 22-year-old spent two year at the Sharks in Durban.