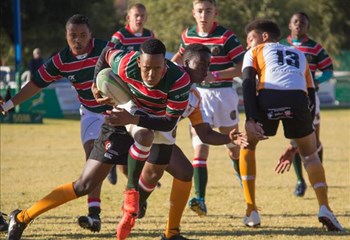 Lesego Seikaneng - Morgan Piek
The Leopards LSEN team came from behind to beat the Free State 53-24 on day two of the LSEN Craven Week at Hoërskool Sentraal in Bloemfontein.

The side from the North West was trailing 13-19 at half time but put in a dominant second-half performance to earn their first win after falling just short against the Golden Lions on Monday.

The Leopards scrumhalf, Lesego Seikaneng, in particular, impressed with a brace of tries, five conversions, and a penalty. He even had a shot on goal from about 60m out on the angle, but the attempt was off target. The eighth-man, Miquel Engelbrecht, also enjoyed a good game with a hat-trick of tries.

The hosts are still without a win after losing 24-15 to the Pumas yesterday. A win against the North West was always going to be a tough ask as they played in the very last match of the day Monday, and opened proceedings on Tuesday.

Meanwhile, the Griffons suffered their first defeat with a 48-17 loss to Western Province. On Monday the Northern Free Staters impressed by thumping the Sharks 69-17.

The boys will enjoy a day off on Wednesday after two tough days on the field.

Welkom scholars up in arms over suspended principal

#BreakingNews: Offices of FS Arts, Culture shut down by Labour