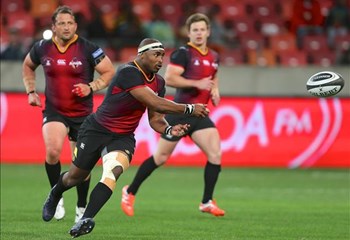 Ntsila will be at the Cheetahs for the next two years, and this comes as a further boost to the teams’ depth in the loose-forward department, after the Springbok, Oupa Mohoje, extend his contract by a year.

In 2017 Ntsila represented South Africa A in two unofficial Tests against the French Barbarians.

The 26-year-old told OFM Sport that he is somewhat nervous, but looks forward to his stay at the Cheetahs.

“It is a new journey and chapter in my life. I haven’t been around that much, so I am looking forward to new learnings and experiences.

“This Covid-19 has been isolating us a lot. I really miss the camaraderie amongst rugby players working to one mission and one goal.

“With that being said, the Cheetahs' brand of rugby is an exciting one, and I know that for sure.

“I am a bit nervous, but at the same time I am very excited to be here.”

Apart from limited game time with the Sharks, Ntsila, has played in 49 games for the Southern Kings and brings along some Guinness PRO14 experience.

Meanwhile, it has been confirmed that the winger, Rabz Maxwane, will be leaving the Cheetahs to further his carry at the Lions in Johannesburg.

Maxwane was the leading try-scorer in the PRO14 during the 2018/19 season, however, due to a dip in form, he enjoyed very limited game time the following season.