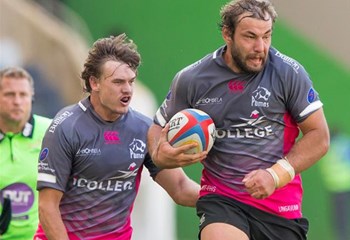 Jeandré Rudolph - Gallo
The Pumas loose-forward, Jeandré Rudolph, has hinted that he may be playing for two teams during the Currie Cup this season.

Rudolph was recently contracted by the Toyota Free State Cheetahs as a replacement for Jasper Wiese who will be heading to the Leicester Tigers.

Draft fixtures for the Currie Cup suggest that the Pumas will play against the defending champions in the opening match of the tournament.

Rudolph told OFM Sport that he could play for the Cheetahs as soon as round two.

“The first Currie Cup game is in Bloemfontein against the Cheetahs, and I am really looking forward to playing for the Pumas in that match.

“I am also going to touch base with coach Hawies Fourie and the rest of the technical staff, just to hear what their plans are for me. It will be to find out more about their plans and strategies because there won’t be much of a turnaround time.

“I think I am still going to be playing for the Pumas on the one Saturday, and that following Monday, I should be starting at the Cheetahs.”

SA Rugby could be announcing the fixtures for the Currie Cup on Wednesday.

Two trophies up for grabs when local rugby season resumes

It's always a good derby - Jordaan