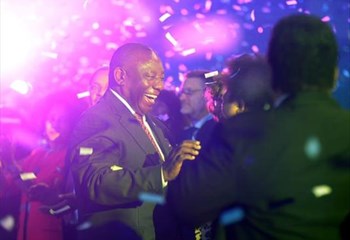 President Cyril Ramaphosa was due to attend an investment conference hosted by global financial company Goldman Sachs on Wednesday, his office said.

The conference in Johannesburg is expected to will bring together chief executive officers, chief information officers, chief financial officers and chairpersons of leading companies and financial institutions across all industry sectors from South Africa and other parts of the continent.

It comes after Ramaphosa's African National Congress extended its 25-year grip on power in national elections last week, although its share of the vote dipped to 57.5 percent from 61.15 percent at the previous elections in 2014, amid anger over a weak economy which critics largely blame on government mismanagement.

On Tuesday, the South African Chamber of Commerce and Industry urged Ramaphosa to appoint a new team of skilled, experienced and dedicated ministers and government officials free of any taint of corruption or nonperformance to boost business confidence.

The Goldman Sachs conference follows South Africa’s hosting of an investment conference last October 2018 where South African and international firms made a broad range of pledges to establish or expand operations in the country.

Ramaphosa said in his state of the nation address earlier this year a second conference would be convened later in 2019.

"President Ramaphosa has welcomed the Goldman Sachs platform as a welcome precursor to the second investment conference," the presidency said.

It said Ramaphosa would once again highlight the government’s commitment to and plans for achieving inclusive growth "that will benefit all stakeholders in the South African economy".

Goldman Sachs is a leading global investment banking, securities and investment management firm that provides a wide range of financial services to a substantial and diversified client base that includes corporations, financial institutions, governments and individuals.