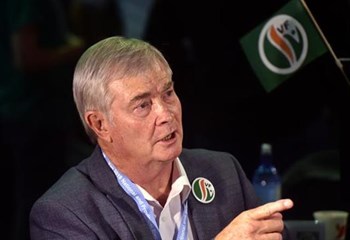 Freedom Front Plus (FF+) leader Pieter Groenewald has said President Cyril Ramaphosa's statements on land expropriation during his state of the nation address on Thursday night indicated he was dreaming.

"What [Ramaphosa] said tonight is that they are going to continue with expropriation without compensation. It is quite clear. And we reject that," Groenewald said.

He was speaking to the media outside Parliament in Cape Town following Ramaphosa's address.

Land expropriation without compensation would be detrimental to the economic growth of the country, Groenewald said.

"I want to say that the president has got a nice dream, but unfortunately when he wakes up, he will find he is living in a nightmare. He said quite a lot of things - it's a wish list, and of course, everybody would like to have that. But we want to know how is he going to do it?"

Groenewald said that Ramaphosa's take on users paying their Eskom bill was an example of poor implementation.

"He said people must realise that if they want to use electricity, they have to pay for it. My question is, if people do not pay - they don't pay at this moment - are they going to cut off the electricity?

"We want practical reasons and practical proposals on how he is going to solve the problem," Groenewald said.

Ramaphosa said during his address that a "significant portion" of the bailout for the cash-strapped power supplier would be fast-tracked.

"We agree that Eskom plays a vitally important role in the economy, but now we are going to speed up the R230 billion [bailout] to ensure that Eskom gets the money earlier than it expects," said Groenewald.

"Eskom is not at this moment on a profitable basis. Is this only temporary? What is going to happen in the end? We are worried about Eskom and it is quite clear that it is emergency procedures and measures that the government [is using] to try and save Eskom at this moment.

Groenewald agreed with Ramaphosa that Eskom was vital to the South African economy, "but the FF+ believes [Eskom is overstaffed] and must get back people who have the competency to do the job".

"And if they do not do that, I am afraid it won't be able to survive,"  Groenewald said.