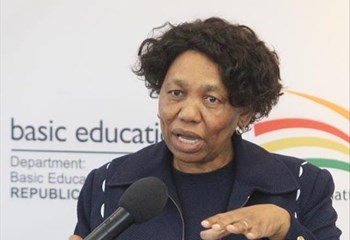 However, the Council of Education Ministers (CEM) has noted that provinces may be at different levels of readiness for the return of grade R pupils, she told a media briefing in Pretoria on Sunday.

It was therefore agreed that those provinces not ready to receive these pupils should provide strategic and realisable plans for ensuring their reincorporation to schools within, but not later than the end of July. A further agreement by the CEM was that all grades that were part of the second cohort, R, 6,and 11, should return to school in an orderly staggered fashion within, but later than the end of July.

"We have spent many hours and days in consultations with our strategic stakeholders, partners, and within government, looking for solutions on how to proceed in this difficult environment. We have sought and obtained advice from scientists, medical and education experts, which informs the decisions that we make on a daily basis within the basic education sector."

Motshekga said the temporary closure of less than four percent of schools due to Covid-19 issues after the reopening of schools on June 8 , starting with grades 7 and 12, was much better than a system-wide closure over the same and even longer period of time. This would come at an unacceptable cost of lost learning and school feeding for an entire generation of children, with a consequent worsening of social and economic inequalities for years to come.

Almost all schools were going to have to adopt innovative approaches with respect to timetabling and classroom management in order to ensure that all children could return to school, while at the same time maintaining the necessary physical distancing measures.

Options, such as platooning, rotating different grades coming to school on particular days of the week, and other innovative approaches based on the different contexts would need to be considered. Most provinces were inclined to favour the rotational option rather than the platoon option, she said.

South Africa, like all countries of the world, was faced with a new “normal” brought on by the Covid-19 pandemic, but the basic education system had to continue to be implemented, monitored, and strengthened in compliance with the prescripts of the Constitution, as well as applicable legislation and national policies, Motshekga said.