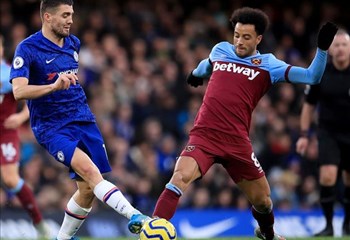 Cheslea vs. West Ham - Getty
On Wednesday evening there will be another four matches in the English Premiership and points will be of importance as numerous teams are vying for spots in Europe for next season.

Bournemouth will face Newcastle at the Vitality Stadium, Arsenal will be in action bottom-of-the-log Norwich City at the Emirates Stadium, while Everton will be at home to Leicester City at Goodison Park. All of these games kick-off at 19:00.

In the final game of the day, West Ham hosts Chelsea, and the Blues manager Frank Lampard says a London derby without passionate fans will be different.

“It will be different in the sense that we have all see how different it looks without fans”, said the former Chelsea and England midfielder.

“It can go both ways at different times. Fans that support their team strongly can give them the edge, and in intense tough moments is can be a different feel. So it takes those factors out of it.

“Potentially it makes it more about eleven players on the pitch against the other eleven individuals’ battles within that.

“I’m not sure whether it will be a positive or a negative effect, but it will be up to us to focus on what we do on the pitch.”

This game at the London Stadium kicks off at 21:15.