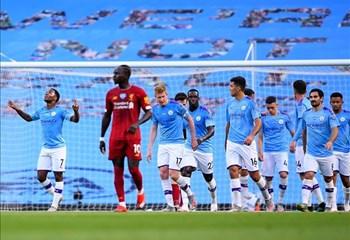 Sadio Mané - Getty
The Sheffield United dream continued on Thursday night in the English Premiership, with the team from Yorkshire claiming a full house of three points against Tottenham Hotspur at Bramall Lane.

Goals by Sander Berge, Lys Mousset and Oliver McBurnie earned the Blades a 3-1 win over José Mourinho's chargers to move up to 7th in the standings.

A 90th-minute goal by the England captain, Harry Kane, served as nothing more than a consolation for Spurs.

Over in Manchester, there was another upset on the cards with former champions, Manchester City, thrashing Liverpool in what was their first game as the new champions.

A lackluster Liverpool had no answer for a determined and rampart City who were out to prove a point after conceding their title a week prior.

A penalty by Kevin De Bruyne, goals by Raheem Sterling and Phil Foden, as well as an own goal by Alex Oxlade-Chamberlain saw the Citizens hammering the Reds 4-0 at the Etihad Stadium.

City coach, Pep Guardiola, was left a happy man after the good victory.

“I’m delighted. Congratulations to the team, we beat the champions with the quality they have.

“I saw in the guard of honour how incredibly focused they were, how they shouted. I saw their faces, that’s why they’re champions.

“They didn’t come here to celebrate. They’d drunk enough beers and they came here to compete.

“So the chances we created, to beat them 4-0, it was so important for preparing against Arsenal and Real Madrid.”