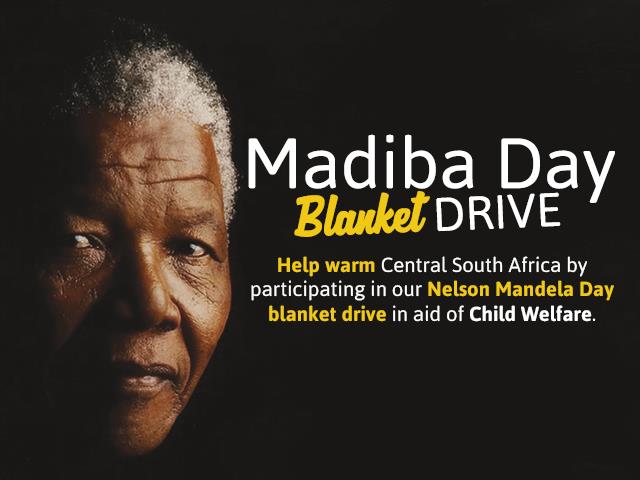 
Nelson Mandela famously said everyone has the ability and the responsibility to change the world for the better. This year, the Nelson Mandela Foundation decided to dedicate Mandela Day to take action against poverty. Give freely, get rid of excess and redistribute resources.

Child Welfare in Bloemfontein, Kimberley, Welkom, Vanderbijlpark, and Klerksdorp will be participating in this one day blanket drive where your 67 minutes will make a difference.

You can drop off blankets, warm clothes and tinned foods at the following points:

Take Action! Inspire Change! The message behind Mandela Day is simple – if each one of us heeds the call to simply do something good every day, we can live Nelson Mandela’s legacy and help build the country of our dreams.

The baton of leadership has been handed over to us. It is in our hands now to make a positive difference.

“What counts in life is not the mere fact that we have lived. It is what difference we have made to the lives of others that will determine the significance of the life we lead.” – Nelson Mandela

According to the Nelson Mandela Foundation, Nelson Mandela International Day commemorates the lifetime of service Nelson Mandela gave to South Africa and the world. It was launched on his birthday, 18 July, in 2009 via a unanimous decision by the UN General Assembly.

Mandela Day calls on us all, every day, to make the world a better place. Each year on 18 July we look back on what has been done, and forward to what will be done.

This year’s theme is “Action Against Poverty”. As the foundation states: “Poverty stalks South Africa. It is at the root of malnutrition, stunting, poor educational outcomes, the skills deficit and unemployment, disease, the loss of dignity, and even anger and violence”.

Therefore, we have to take action against poverty, and we have to work together to do that.

Each of us can make every day a Mandela Day by choosing to do something sustainable that will help South Africa eradicate poverty and ensure we each realise the ideal of a dignified life.