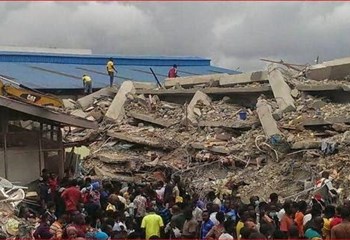 Johannesburg - Social workers would receive two South African toddlers orphaned by the building collapse in Nigeria when they arrived in the country on Monday morning, an official said.
The two orphans were aged 18 months and two years, acting Cabinet spokeswoman Phumla Williams said.
Another child, aged six, was also part of the 26 injured South Africans arriving home from Nigeria.
Williams said the three children were in good hands.
"These kids, we are expecting that the social development (department) will assist in making sure that they link them up with their relatives," she told reporters outside the Swartkop Air Force Base in Pretoria.
"Yes, there is a process to make sure that they are taken to their families."
Government announced on Sunday that 26 South Africans injured in the Lagos church collapse would be evacuated to Pretoria.
Eighty-six people, among them 84 South Africans, were killed when a guesthouse belonging to the Synagogue Church of All Nations collapsed on September 12.
Williams said the country's military health service had sent a mass casualty aero-medical evacuation team to Lagos.
"Among them is an orthopaedic surgeon, Colonel Theo le Roux, an internationally recognised trauma surgeon; four aero-medical officers, as well as nursing officers who have specialised in aviation medicine, and eight military paramedics," she said.
The team would evacuate patients and help the critically wounded on their 10-hour flight back to South Africa.
"Extra measures were taken to provide care and comfort to injured children on board," said Williams.
The plane, which was scheduled to land at the Swartkop Air Force Base at 7am on Monday, was delayed.
"We have since been told by officials that it delayed departure in Lagos. They are now expecting it to touch down at about 10.30am," she said.
"Unfortunately I don't have the specific reasons on why it was delayed."
The survivors would be taken to the Steve Biko Academic Hospital. A convoy of 12 ambulances, Tshwane metro police officers and the SA Police Service Flying Squad entered the military base after 7am.
Five soldiers, one holding a rifle, stood guard at the main entrance. Local and international news crews and broadcast vans had been outside the entrance since 5am on Monday.
Sapa
Related Articles:

'On brink of collapse' - Bloem Water

Africa to be declared polio-free