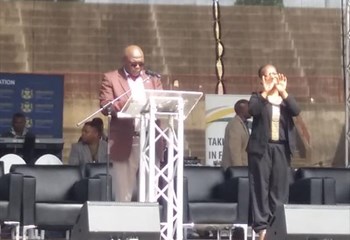 The party's top structure just arrived at the packed stadium where they interacted with the learners and members of the public.

This, after Ramaphosa embarked on a door-to-to campaign ahead of the much-anticipated elections next month.

Ramaphosa is during his address expected to speak on issues relating to the lack of water supply in the area, service delivery protests, municipal employees' strikes over non-payment of salaries and third parties, as well as ANC divisions within the region.

He is also expected to address questions regarding the municipality’s water board and Eskom debt.

The municipality owes the power utility over R2.8 million, and is ranked the highest defaulter in the Free State.

Municipalities in the province collectively owes the power supplier over R7.8 billion.

OFM News previously reported that hundreds of ANC supporters, members of the public and learners were already making their way to the stadium in Phuthaditjhaba.

Meanwhile, Lucky Nkuyane reports that hundreds of African National Congress (ANC) supporters on Saturday brazed the cold weather in the QwaQwa Multipurpose centre during the visit of the party president.

The supporters welcomed Ramaphosa who was flanked by the provincial party chairperson, Sam Mashinini, among others.

A video, posted by Mashinini on his Facebook account, shows supporters singing and dancing in their traditional yellow, green and black party regalia.

Mashinini says in a true show of commitment towards unity and renewal of the ANC, members and supporters broke in a song about unity.

He further described this as an emotional moment to see such unity.

He says the ANC in the province continues to reaffirm its commitment to the objectives of unity and renewal.

Ramaphosa is also expected to campaign onwards to the troubled Maluti-a-Phofung Municipality.