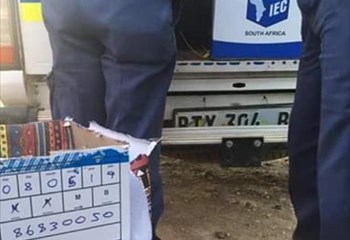 PHOTO: Facebook
Another scandal of abandoned ballot boxes is facing the Independent Electoral Commission (IEC) in the North West.

The party says these boxes were found in Ward 4 near Bloemhof Primary School, earmarked as a voting station by the IEC.

The EFF has since called on the IEC to investigate the incident and bring those found to be on the wrong side of the Electoral Act to book.

Earlier national police spokesperson, Vish Naidoo, said at least 20 people have been arrested so far for being in contravention of the Electoral Act after they allegedly nabbed for trying to duplicate their vote.

He says 19 of those arrested in KwaZulu-Natal were denied bail but did not specify as to when they are expected to appear in court again. He says if the suspects are found guilty they may face up to five years behind bars or be fined.

Meanwhile, the so-called small parties on Wednesday staged a protest at the IEC Results Operation Center (ROC), protesting the results. They say they want a rerun of the elections and they demand that the elections be declared not free and fair.