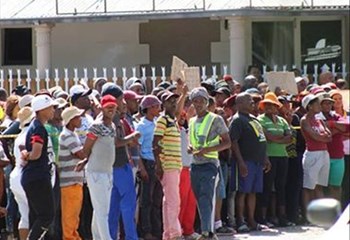 With just a few days after the hotly contested sixth democratic election and the African National Congress (ANC) again emerging victoriously, some Koffiefontein residents weighed in.

One local resident who was part of the leadership that sought the resignation of the mayor of the Letsemeng Local Municipality in the Free State, which is now under administration, says all they want to see is the ruling party fulfilling its promises.

Simon Khomojong says they are really not that hopeful about whether things will turn around for the better for the community, despite the ANC emerging victorious at the polls. He hopes that both the national, provincial and local government will deal with the rampant corruption that eats a lot off the plate of the poor and frustrated unemployed youth in that area. OFM News previously reported that residents accused the former mayor and her mayoral committee of fraud and corruption.

ANC president Cyril Ramaphosa thanked the governing party’s supporters for giving the party another term to govern. Ramaphosa said the party heard the concerns of over 10 million people who voted for the party in the election. He spoke outside Luthuli House at the Siyabonga celebrations, where he addressed scores of supporters. Khomojong is, however, adamant that the victory for the ANC means nothing if the ruling party cannot compliment that implementation of policies and deal with fraud and corruption in the society.