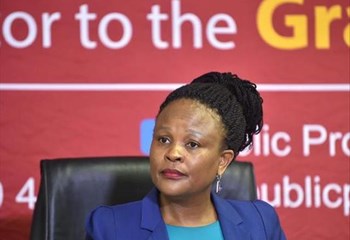 The office of the Public Protector (PP) has labelled accusations levelled against it by irate subcontractors of the controversial multi-million rand North West Vuk'uphile programme, as dishonest.

Spokesperson of Busisiwe Mkhwebane, Oupa Segalwe, says the claims that the PP reneged from her 2018 remedial action between the subcontractors and the Department of Public Works and Roads are baseless.

This utterance follows after 64 subcontractors accused both the department and Mkhwebane of backtracking from paying them an exgratia amount of R4 million.

A few years back, the subcontractors suffered financial loss after the department abruptly cancelled the developmental Vuk'uphile programme.

Some of the subcontractors have indicated to OFM News that they will be challenging Mkhwebane's remedial action in court.

The group say the PP changed her remedial action and opted for them to be given projects worth the same amount without receiving any form of payment from the department after years of legal battles.

They have also accused Mkhwebane's compliant officer of failing to communicate with them by ignoring several enquiries over the settlement.

However, Segalwe says there was a settlement agreement between the parties with Mkhwebane overseeing the process, but it did not include the alleged R4 million ex gratia payout to subcontractors.

"A settlement agreement basically means that the contractors and the department, as represented by the administrator, are agreeing on terms to say we have a dispute, but to resolve it,  this is how we agree to resolve it amongst ourselves in the process facilitated by the public protector," he adds.

Segalwe further adds that the group signed for the settlement and they were given an opportunity to interrogate it before agreeing to it.

Malema: GBV should be a crime against the state