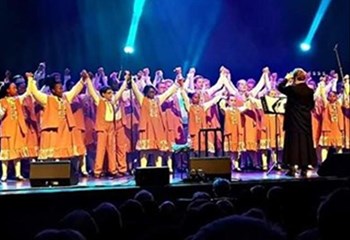 A young and accomplished conductor has been appointed by the parent committee of the Bloemfontein Children’s Choir to take over the reins from the choir’s founder, Huibrie Verster.

The choir’s newly formed parent committee views this appointment as a new chapter in the choir’s history.

In June, Verster, announced virtually that she had decided to retire from her role and disband the renowned children’s choir permanently. In the video, she requested that the name of the choir not be used. The reaction to the disbandment drew an outpouring of support and messages of nostalgia, describing the choir’s impact on the Free State. On Sunday, 21 June choir members, former and present, took part in a drive-by farewell, leaving behind presents and flowers for Verster. One by one vehicles passed by Verster’s Dan Pienaar home thanking her for her dedication and the love she bestowed upon the choir. It was during the farewell that the choir representatives announced its surprising continuance.

Choir representative, Elke De Witt told OFM  “Verster's retirement as a conductor came at a time when the world around us has changed, new leaders can take the choir's new dream further with guidance and innovations”. The news of the choir’s continuation under the same name but a different leadership has drawn mixed reactions. Some have welcomed the news, others like the choir’s former parent committee member and tour organiser, Magdel Dippenaar, requests that Verster’s wishes that the choir should be disbanded must be respected. She suggests that a new choir with a new name must be established.

OFM News previously reported that Gauteng-based Naledi award-nominated actor, singer and former Bloemfontein Children’s Choir head boy, Lebohang Toko, said he never thought the choir would come to an end. “Memories lots of memories. But most importantly, love. That is what you taught us, discipline and love”. Toko says he is the man that he is today because of Verster and his time in the choir. “Thank you Juffrou Huibrie, may your new journey be as beautiful as the old one. May you soar and spread your wings even further than you ever had”.

The choir’s last performance was at the Jerusalem Prayer Breakfast at Divine Restoration Church in Bloemfontein in mid-March. As has already been reported, internationals from Israel, the United States of America (USA), and France, majority of whom came to the country to attend the church meeting, later tested positive for COVID-19 following the declaration of a state of emergency by President Cyril Ramaphosa becoming the first set of positive cases in the province.

Cause of Welkom #fire investigated