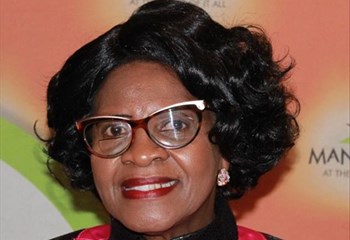 Former mayor Olly Mlamleli
Sparks are expected to fly at the Mangaung Metro Municipal Council on Friday during the continuation of the council sitting which previously saw its former mayor ousted with a vote of no confidence.

The council speaker, Mxolisi Siyonzana, is convening the much anticipated sitting where he is also set to declare the vote results of the previous sitting. This sitting comes amidst serious tension within the ANC after some of its councillors voted with the FF Plus, EFF and DA to remove the embattled former mayor Olly Mlamleli during last week Friday's sitting.

Since her removal, there have been many questions as to whether the ANC will crack the whip in a similar fashion as it did with Maluti-A-Phofung councillors in 2018, when it fired 14 of them. It also remains to be seen if pro-Mlamleli councillors will heed the call of the ruling party by raising a point on the agenda with intention of reinstating her, or if they will wait for three months to lapse before raising a point of the motion. The ANC is yet to comment.

Previously the DA's Hardie Viviers told OFM News that if Mlamleli were to be re-elected as the mayor before three months lapse, according to the Standing Rules and Orders of the Council, it will be through a point on the agenda in terms of the Municipal Structures Act - and not through a motion.

During this, there have also been too many conflicting reports from the streets of Mangaung with others celebrating her removal while others went as far as planning marches to see her reinstated as the mayor.

On Friday last week, 31 councillors voted for the removal of Mlamleli while 28 opposed it, and 8 spoiled their votes. The Freedom Front Plus proposed the motion against Mlamleli, who previously survived at least two such motions after the DA's motion of no confidence failed in early February.

Opposition parties have been blaming Mlamleli for the financial woes the Metro is currently facing, with debt to various service providers increasing to billions of rands in the last few years. Pressure on the former mayor mounted further when Mangaung become the first metro in South Africa's history to be placed under administration.

Moqhaka soon to have new mayor