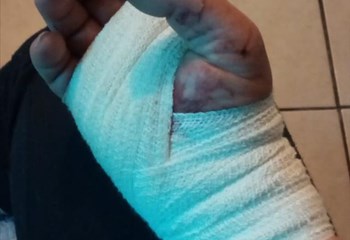 A 28-year-old man was arrested for business robbery and two counts of sexual assault in Bloemfontein on Tuesday.

The armed suspect allegedly entered a daycare centre in Fauna at around 09:00 on Tuesday morning and tied up the 33-year-old female owner of the centre. He threatened to set her alight using petrol, with the victim alleging it smelled like alcohol.

The suspect then robbed the centre of a laptop, two cell phones, a tablet, and an undisclosed amount of money. He stole and fled with the victim’s vehicle. Police spokesperson Motantsi Makhele says police tracked down the stolen vehicle at a dumping site and with the help of the Flying Squad, captured the suspect in the veld whilst trying to flee on foot. The suspect is expected to appear in the Bloemfontein Magistrate's Court on 20 August 2020.

The victim's exact injuries are currently not known after she was tied up with electrical wire and assaulted by the suspect. The police also say the victim’s 15-year-old child was assaulted by the 28-year-old man.

An anonymous source told OFM News that the children at the daycare centre were locked in another room. Makhele could not confirm these allegations.

The laptop, two cell phones and tablet were all recovered from the suspect.