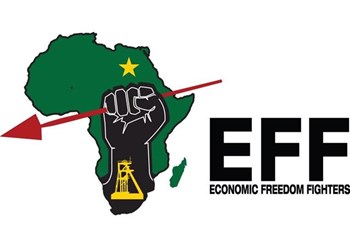 EFF leader, Julius Malema, shifted the spotlight back to the contentious issue of land redistribution without compensation, when he took to the podium in the Free State town of Senekal on Friday.

The impassioned leader addressed the issue of racial divisions that have occupied the media space of late, maintaining that his party hates racists, not white people.

However, the bulk of his address was focused on economic inequality, emphasising that the proverbial rainbow nation is still reeling from the effects of institutional racism, arguing it did not end in 1994.

Malema told the thousands of his members in attendance, that the effects of apartheid can be felt today, when looking at who has wealth in South Africa.

The EFF leader maintained the fight for economic emancipation in South Africa is far from over, because our parents were “not brave enough” to finish the fight themselves. “We are here because of them,” says Malema.

State Security Minister, Ayanda Dlodlo, has maintained that no worrisome incidents were reported in Senekal on Friday, despite media coverage emphasising that tensions were high. Dlodlo, who was flanked by Police Minister, Bheki Cele, in their joint briefing on Friday, revealed that she received a situational report from intelligence officials on the ground and she was informed that the exchange of words between protestors captured on screens, is what you get when you have a large gathering of people with opposing views like in this case with the EFF and the farming community in Senekal.

“I think from what we have seen over the last few days, much as in the media space there has been an indication that there are tensions between the various sides – the EFF or the farming community – by and large all of them took a decision that they did not want to see violence erupt”.

In line with Dlodlo’s sentiments on the matter, only one person was arrested for possession of an unlicensed firearm between Thursday and Friday, which is in stark contrast to reports on social media alleging a boot full of weapons were found outside the town.