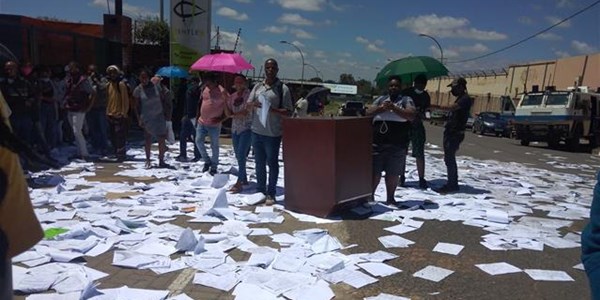 Scores of disgruntled job seekers have gathered outside the Centlec premises in Bloemfontein where thousands of Curriculum Vitaes and personal documents have been scattered around.

A group of approximately 100 young people seeking employment are picketing outside the premises in demand of answers. One of the disgruntled job seekers, Vuyisilwe Matoane, tells OFM News they are deeply hurt by what seems to be an act of sabotage. He says they have travelled from far to submit their applications for various vacant positions, only to find thousands of CVs thrown away outside the yard.

Another job seeker, Tello Makgwane, has meanwhile raised security concerns regarding the scattered CVs, stating that it is a breach of confidentiality and poses a risk of identity theft, amongst others.

A 32-year-old Botshabelo resident, who is a father of two, has on the other hand told OFM News he spent his last cents to travel to Bloemfontein to submit his application for the position of General Maintenance and is disappointed by Centlec's Human Resources.