Health Minister Joe Phaahla has expressed concern at the number of Covid-19 positive cases in the Free State.

Engaging the media at the Universitas Academic Hospital as he embarks on an oversight visit to various health facilities in Bloemfontein, Phaahla confirmed that the number of active cases in the province is a major concern. This, as the province is currently ranked amongst the top 4 provinces with the highest number of active cases. He said the province must ramp up its vaccination drive and ensure that it meets its target of inoculating 70% of its population by the end of December. With the 4th Covid-19 wave expected to soon hit the country, Phaahla said the province needs to ensure that elderly citizens are vaccinated. He alluded that the province is lagging a bit behind on its target of getting 1.9 million people vaccinated to reach herd immunity and more must be done.

“We are happy that the Free State is also showing improvement, but we think we can do better. MEC, you can do more. Your province as you said is neighbouring the Northern Cape, which is also struggling in terms of bringing the numbers down. You are not too high as a province, but you are also not low as we would want. At the present moment, the Western Cape, the Eastern Cape, and KwaZulu-Natal remains the provinces with the highest numbers, followed by the Free State,” said Phaahla.

“This third wave has been very long compared to the first and second wave. We are now on 120 days of the third wave, but there is light at the end of the tunnel. As of yesterday, new positive cases are down by 35% as compared to the last seven days. Hospitalisation is also down overall in the country. We are slowly getting there, but should still do more,” he added. 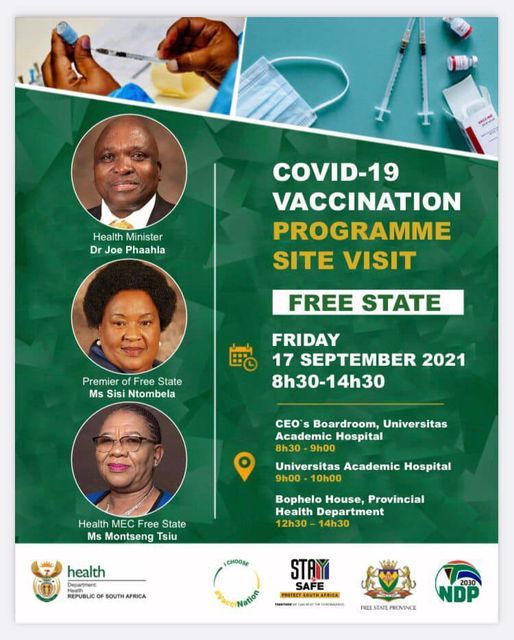 Phaahla has further called on members of the public to adhere to Covid-19 protocols stating that the more the infection rate goes down the more the country will be able to regain economic and social activities.

Riemvasmaak residents fed up with lack of services