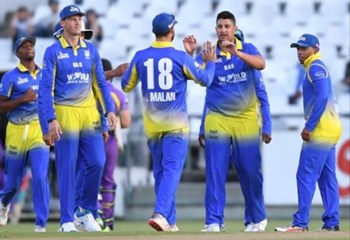 Rory Kleinveldt - Gallo
Assistant coach Faiek Davids is hoping the World Sports Betting Cape Cobras can maintain their good home form in the CSA T20 Challenge when they welcome the struggling VKB Knights to Newlands in Cape Town on Tuesday.

The match is a top versus bottom affair as the competition reaches halfway for both. The hosts are presently top of the standings after winning three out of their opening four games so far, while the visitors are last, having failed to register a win.

Key to the Cobras’ climb to the summit has been back-to-back home victories, something they failed to do in the Momentum One-Day Cup that concluded last month.

They could only win one out of five in the 50-over campaign, even though they still managed to reach the semi-finals where they lost away to eventual champions the Multiply Titans.

Davids believes home form is imperative if they want to have a shot at the title. “We all know that in T20 anyone can play well on the day,” Ashwell Prince’s number two said. “So, we’re quite excited about the whole T20 competition.

“Hopefully we can improve on the way we play in front of our fans. It was not very good when we played in the Momentum One-Day Cup, but so far so good in this competition.

“Home form is very important if you want to go all the way because it allows you to earn that home advantage in the play-offs and, if you can win at home, you have a good chance of going all the way.”

For the Knights to have any chance of winning this trophy, they need to start winning and winning immediately.

To be fair to the Central Franchise, two of their games so far have had to be abandoned on account of the weather.

However, their assistant coach, Werner Coetsee, has high hopes for the tournament. “We’re still very optimistic and want to do well in this competition,” he said. “Particularly after playing so well at the back end of the 50-over competition.

“We back ourselves and we feel that we’re playing the sort of cricket that should get us to the semi-finals at least.

“Getting to the play-offs remains a massive focus for us and we still feel we’re playing the sort of cricket that should get us there.”

Knights excited to get back to training

Very excited to be given the green-light - Makwetu