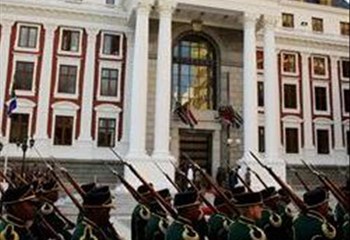 A video of an EFF member slapping someone believed to be a plain-clothed cop has gone viral.

The incident took place after President Cyril Ramaphosa's State of the Nation Address in Parliament on Thursday.

The EFF was apparently prevented from entering a certain section of the precinct after the speech.

Leaders of the party are seen here, but we understand the perpetrator is Marshal Dlamini.

It's been reported that a female VIP protection officer was also pushed.

eNCA is trying to get comment from the party and the presidency.

We’re also trying to verify whether a case has been opened.