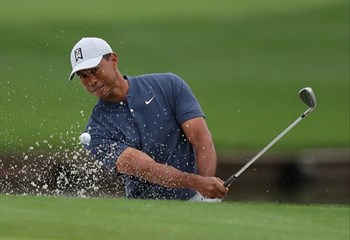 Tiger Woods - Getty
The 14-time major winner, Tiger Woods, is confident ahead of teeing it up at the Masters for the 22nd time on Thursday.

The world number 12 is a four-time winner of the famous green jacket at Augusta in Georgia.

Woods, who has famously been battling with a back injury over the last couple of the years admits that his win at East Lake in September made him realise that he can still win.

Woods says that he is really hungry for the win at Augusta.

“I don’t really need to win again, but I really want to,” said the former world number one.

“After I won my 14th major, I felt like I still had plenty of major championships that I could win. Unfortunately, I just didn’t do it.

“I put myself with changes on the back nine various Sunday’s and haven’t done it.

“Hopeful this year this I put myself there again and hopefully I get it done.”

Woods has been pair alongside China's Li Haotong and Spain's Jon Rahm for the first round.

The second-ranked with Dustin Johnson has been tipped as the favourite to don the green jacket on Sunday, while the South African-born world number one, Justin Rose is also among the top three.

Pairing for the first round (South African time):

Burmester looks forward to teeing it up again

About the Writer:
MORGAN PIEK
Morgan Piek is the sport editor and anchor for OFM and Bloemfontein Courant. When his not in studio or at his desk he can be found spending time with his wife and baby boy.He is a keen trail- runner and will grab any opportunity to hit the veld or mountains and soak up the free vitamin D on offer by the African sun, and lives by the words “What comes easy won’t last, what lasts won’t come easy”.