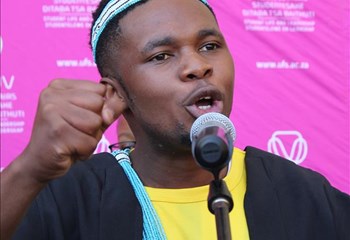 Sikhululekile Luwaca (Mark Steenbok/OFM News)
Bloemfontein - The newly elected Student Representative Council (SRC) president at the University of the Free State’s Bloemfontein campus says he is ready to lead during a difficult time.

Sikhululekile Luwaca told OFM News that he hopes to deal with the gender policy on campus and help establish an anti-discrimination policy in his five months in office. The elections was postponed in August last year due to student protests and the availability of the Independent Electoral Commission. A Transitional Student Council served on an interim basis since January 1. Luwaca says they are going to engage with management soon on issues regarding free education and registrations.

About the Writer:
MARK STEENBOK


Mark Steenbok is inquisitive and very much in love with the unpredictable nature of working in the OFM newsroom. He obtained his Diploma in Language Practise in 2015. Before joining OFM he worked as a sport presenter at a local community radio station, and freelance writer for a lifestyle magazine.He believes everybody has a story to tell.