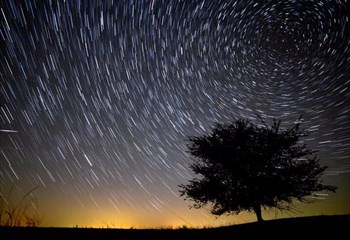 Photo: Twitter.com
A meteor shower is expected to light up the night sky on Friday and Saturday night. The annual Orionid Meteor Shower is predicted to display between 10 and 20 meteors per hour.

According to Jacaranda FM, Elias Aydi, a Ph.D. student affiliated with the South African Astronomical Observatory (SAAO) and the University of Cape Town (UCT), explained that a multinational group of astronomers recently discovered what might be the brightest stellar eruption ever observed.

Aydi explains a meteor is a large rock passing through the atmosphere of the earth. It burns and evaporates and then leaves behind a trail of gasses due to high speeds.

“It is a beautiful light showing in the sky. If you go outside and gaze at the sky, you will see the beautiful lights which are actually rocks passing through the atmosphere,” says Aydi.

“People wish upon them, however, none of the wishes will come true, believe me,” says Aydi.

According to Aydi, the mighty eruption was first detected on the 14th of October in Argentina. It since then attracted astronomers across the world.

About the Writer:
JOSCA HUMAN


Josca is the AM newsreader and compiler for OFM. She comes from Port Elizabeth where her radio journey began at the tender age of 18 years old. When she is not at OFM, you can find her riding horses or being outdoors.